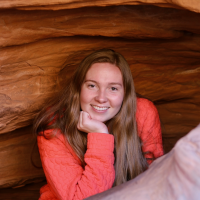 Abby Woodfield is a double major in Political Science and Psychology with a minor in European Studies. Having grown up in the foothills of Provo (mere blocks from the university she now attends), Abby was socialized from a young age to love learning. It is thus no surprise that she hopes to pursue a PhD and become a professor. She is especially passionate about comparative politics in Europe and the relationship between socialism and democracy. Abby spent a portion of 2019 as a research intern for the European Union where she explored a number of social policy topics ranging from gender rights to healthcare systems. She currently researches international banking regulations for Dan Nielson in the Global Politics Lab and works with Jessica Preece as a GPL Fellow. Prior to serving in PAS leadership, Abby acted as co-president of the BYU College Democrats club on campus, organizing and participating in debates, lectures, and academic panels for the organization. When she is not exploring the great outdoors, Abby can be seen watching movies (ask about her curated list of favorite films). She also enjoys illustration/design and is excited to put her creative talents to use this year as the advertising officer for PAS.